Revealed: How two patients a day die of thirst on hospital wards

Dehydration contributes to the death of more than 800 Łhospital patients every year, the latest figures reveal.

Another 300 die malnourished, while thousands more die of Łinfections and crippling bedsores. 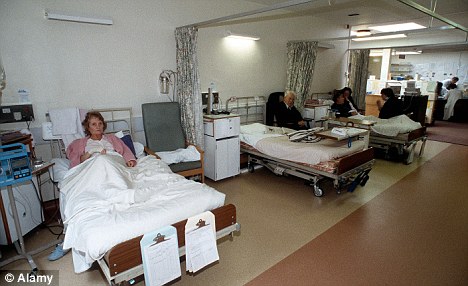 Scandal: Shocking new figures have found that 800 hospital patients die of thirst every year, while a further 300 die because they are malnourished (file picture)

The appalling statistics can be disclosed a day after the Daily Mail revealed that hundreds have died of thirst in our crumbling care homes over the past five years.

They show that the hospital death toll from dehydration is six times that found in residential care.

However, the figures may include many care home residents who were rushed to hospitals with dehydration in their final hours.

Analysis of the data from the Office for National Statistics reveals that in 2009, the latest year for which figures are available, 816 hospital patients in England and Wales were listed on death certificates as having died suffering from dehydration.

The figures include death certificates where dehydration was listed as the underlying cause, as well as those where it was a Łcontributory factor.

As with dehydration, some of these figures could include people who had serious illnesses such as stomach cancer – meaning not all the cases are necessarily due to neglect.

Rhonda Smith, of malnutrition charity Bapen, said the death Łcertificates massively underestimated the true extent of the problem – and that the real figure ran into thousands a year.

The statistics also showed that 3,627 patients died with C. difficile in 2009, up from just 457 in 1999; and 671 died having contracted its fellow superbug MRSA – three times the number when Labour came to power.

Modernisation call: Health Secretary Andrew Lansley said it would be irresponsible to delay any reforms

These numbers are probably a massive underestimate because people are not always tested for the bugs and the result is not always entered on death certificates.

In 2009, 604 patients died with crippling pressure ulcers – bedsores – which are entirely avoidable if nurses ensure patients are turned in bed regularly.

Bedsores increase the risk of infection and quadruple the elderly’s risk of death in intensive care units.

Victims of neglect will disproportionately be made up of the over-65s, who account for two thirds of the occupants of hospital beds.

Neil Duncan-Jordan, of the National Pensioners Convention, said: ‘These figures show yet again that the care of older people is at breaking point. They are seen as a secondary priority when there are other jobs to be done.

‘If we can’t as a society look after the most vulnerable people, how can we call ourselves civilised?

‘Overstretched staff don’t have the time to carry out basic functions. Until we crack that very simple problem, this will go on and on and on.’

Last year it emerged nurses were having to be reminded that it was part of their job to feed frail patients and check if they have bedsores.

Katherine Murphy, of the Patients Association, said: ‘The extent of the neglect displayed here is truly horrifying. How can it be that 800 people died of dehydration in a modern hospital?

‘Why were patients left in such a horrendous condition that 600 died because they had bedsores?’

Health Secretary Andrew Lansley said: ‘This just goes to show that we must modernise the NHS. It would be irresponsible to delay.

‘The plans we have set out will ... free nurses and doctors from Labour’s legacy of bureaucracy, which diverted attention away from patients, so that they can focus on improving care.’

NHS staff who neglect patients should be prosecuted, experts say.

At present, hospital workers can face prosecution only if a serious error results in a patient’s death.

But they should also face legal action for ‘gross dereliction of duty’, as happens in France, researchers from the University of Manchester wrote in the Journal of Medical Ethics.

Referring to the scandals such as that at Mid Staffordshire NHS Trust, where up to 1,200 more patients died than expected because of poor standards of care, they urged the Government to Łcreate a criminal offence of wilful neglect to hold individual NHS managers and workers to account.

However, they said staff covering a ward that was too busy due to failings beyond their control should not face the wrath of the law.

Find this story at www.dailymail.co.uk/news/article-1352372/How-patients-day-die-thirst-hospital-wards.html